We have a guest post! In fact, we have our first guest post ever! A neighbor of mine, Nicole Gallmann, has a pup I was fortunate enough to dogsit for a little while ago. When I got a Logi Circle camera for evaluation purposes, with the condition that someone review it, I thought of her: she was going away and leaving her little girl with me for almost two weeks, so I figured she would like to be able to check in and see how everyone was. I told her to pull no punches in the review, so consider this the unbiased opinion of the owner of a cute little dog.

And with that, take it away, Nicole!

A few weeks ago, I had the opportunity to try out a fancy new piece of technology in exchange for my review: the Logi Circle Camera from Logitech (i.e., a “nanny cam”). With a long-needed vacation approaching, the timing proved manifest. I’d be able to keep an eye on my dog, Wendy, while away from home and under the care of her dog sitter (your regular author here, Adam).

Wendy is a six year old Shih tzu poodle that I adopted in 2010 from PAWS Chicago, a no kill animal shelter in the city from which we recently relocated. She was one of their “Twelve Strays of Christmas” and from the moment I saw her on their website, I knew. Except for vacations and sporadic work travel, we’ve been inseparable ever since.

So, without hesitation, I dug into the perfectly square cube the web cam comes packaged in, and promptly plopped it and its charging ring down on the shelving in our front room. Although it’s portable once fully charged, I opted to leave the camera on its base as Wendy typically lazes on the back of the couch, looking out the window all day. Setting up the camera through the free Circle App for iPhone was quick and easy. I think, in all, it took three minutes? Maybe?

With the camera in place, we left the next morning for the airport. As our uber pulled away from the curb, I promptly opened the Circle app to catch Wendy settling in for what would be her first nap of the day. Throughout the days to come, I was able to check in on her at will. In fact, it became part of my morning routine! 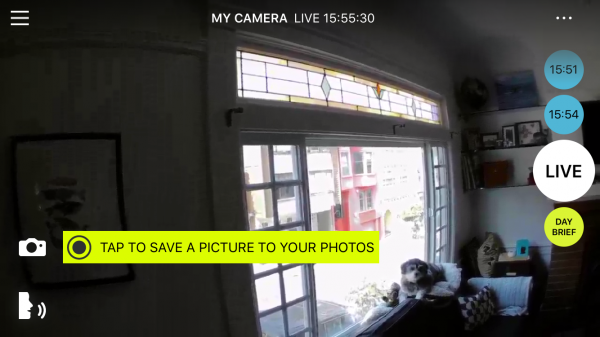 Don’t worry, the green bar is just a prompt. The rest of it is the standard interface.

There I was, on a beach thousands of miles away, watching Wendy watching the neighborhood from our front window. If I wanted to, I could also access a timelapse summary of activity in the room from midnight (night vision works!) to the current time, with the summary resetting every 24 hours. I was even able to talk to Wendy through the camera and hear her barking via the two-way mic: a feature that came in handy when I caught her gnawing on a hind paw. I was able to remind her there’s “no licking”- she was confused, but surprisingly complied (for almost a whole minute)! 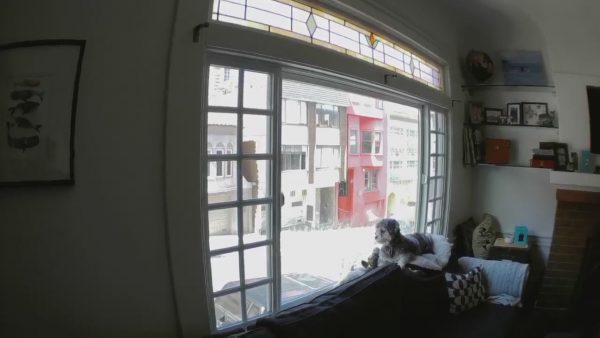 Picture as saved to ‘my photos’.

Ultimately, the one functionality that I wish the web cam had is the means to pivot and zoom remotely via the app. I tried using my iPhone’s touchscreen to zoom and turn the camera (the most intuitive option), but with no luck. I also searched the bare-bones in-app menu, assuming one of the icons there must offer some form of remote control over the camera, but came up empty-handed. Maybe in future iterations?

That said, now that we’re back from vacation, I still use the camera when I have to be in the office. Having the ability to see and talk to my dog throughout the day has given me greater peace of mind and allowed me to feel connected to her when I can’t be there in person. Puppy cam for the win!

I know there are other webcams out there (which I haven’t used) that may have more bells and whistles, but for how I’ve been using the Logi Circle; it’s proven more than suitable.

This entry was posted in Product Review and tagged Webcam. Bookmark the permalink.