Oh holy dear sweet mother of dog. It has been murder the last few days. Making arrangements to get the Lummox repaired (all minor-ish stuff, but some of it I really don’t want to leave without addressing. Like the broken in-dash air conditioning and the shower that leaks into the bedroom). Buying stuff to kit her out. Packing. Organizing all the computer-y stuff I have to take with me. (That by itself is a two-day job!) Performing promised repairs to Autumn’s laptop, which I couldn’t do before because I didn’t have the parts. Figuring out how I’m going to do my laundry while on the road.

Funny story about that last: I contacted Marathon about their new all-in-one washer/dryer, which I have heard cautiously optimistic things about. It turns out they’re right down the road from me, relatively speaking. It also turns out that their lead assembly technician is also an RV enthusiast and does contract work as an RV renovator, so I’m going to drop by their place with the Lummox and he’s going to see what it would take to install the thing. It would be ridiculously easy if it were only three inches narrower… but it still might be possible.

Anyway, in the midst of all that, my brother’s ecommerce web site search (which I had somewhat precariously set up myself) decided to stop working, and my landlord suddenly emailed and said that in 30 days they were going to tear out the garage for a few months to earthquake-retrofit, and I am actually somewhat surprised and please that I am not currently having a panic attack. It is probably because after driving the Lummox for 15 minutes I am immune to panic attacks.

So here she is. She’s roughly half the square footage of my apartment, but with much more usable storage space. And she’s much, much nicer than my apartment, which is grungy, has a carpet that is at least 25 years old, and hasn’t been redone since the place was built in the early 1970s. The Lummox has style. I am going to enjoy hanging out with her. 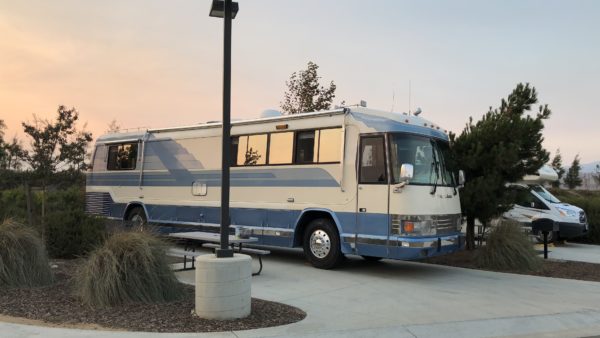 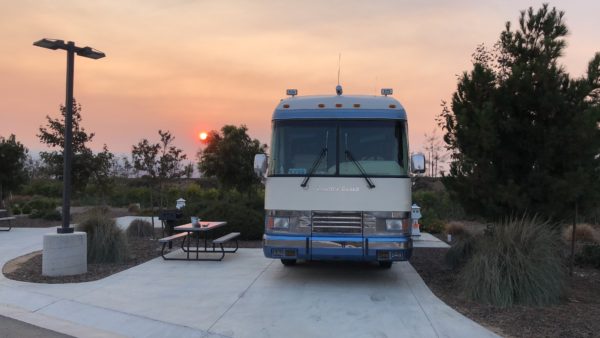 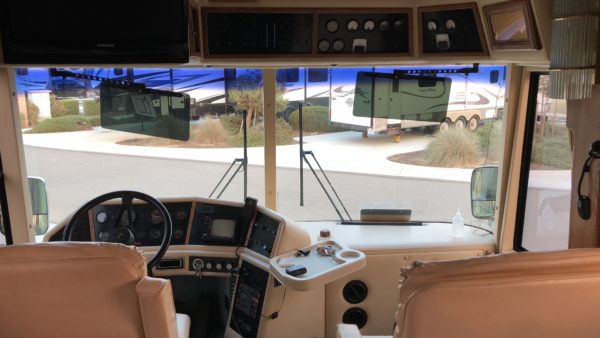 She has more switches than some small airplanes. And gauges! So many gauges! And many of the gauges show different things depending on what switch is thrown! 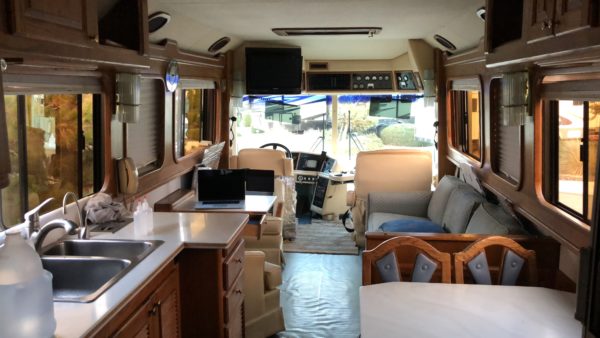 My apartment: two windows that open out onto air wells. No natural light worth mentioning. The Lummox? ALL THE WINDOWS. 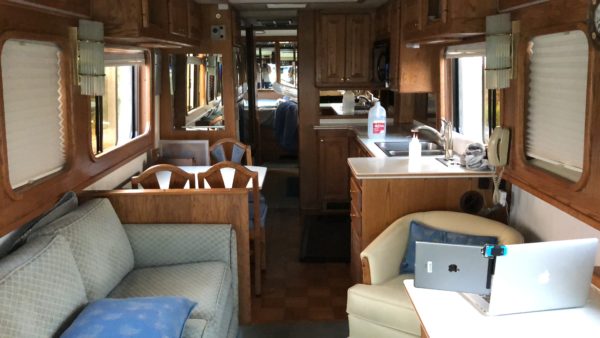 Kind of wish the kitchen table folded into the wall. Not because I need the space for anything. Just because it would be AWESOME. 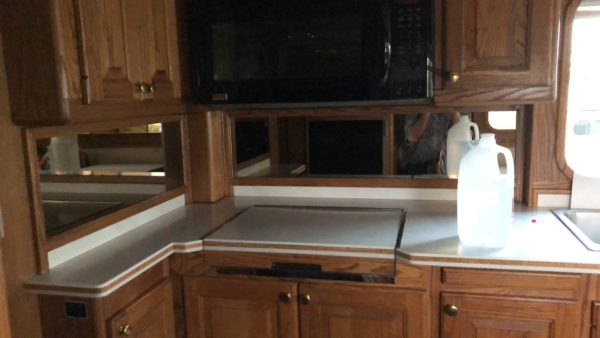 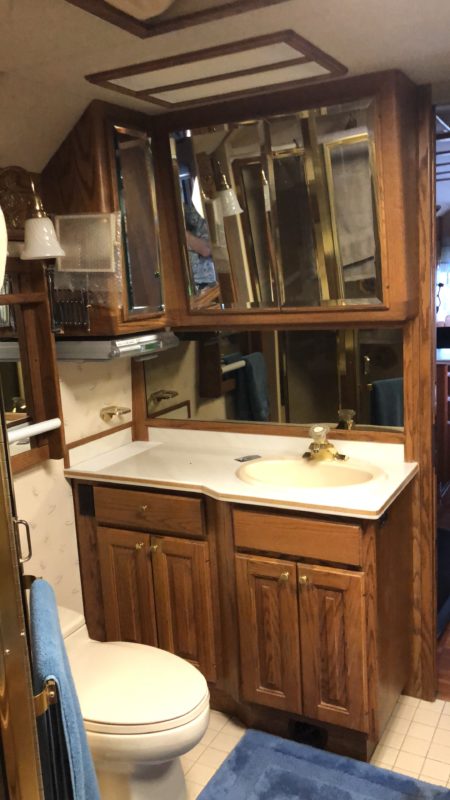 The bathroom is, for a nice change of pace, actually smaller than my apartment bathroom. But still much more convenient, and nicer. Also there is a separate stereo system, installed by the owners (not standard equipment), in the restroom. I am at a loss to explain this. 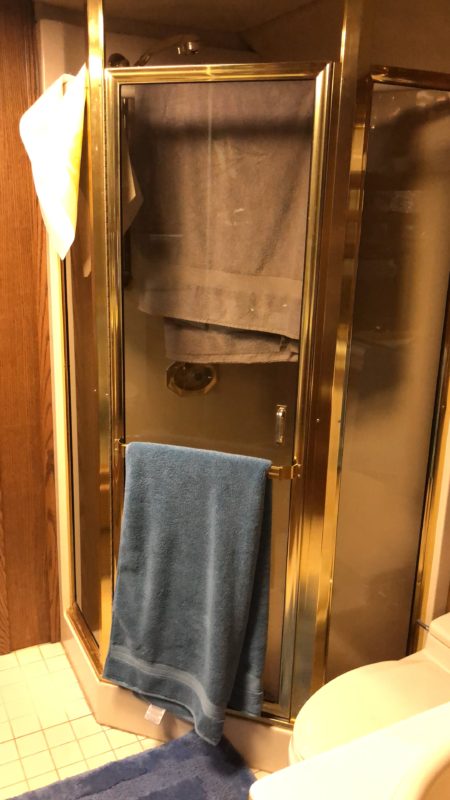 The shower is a lovely size. No bathtub — which believe it or not some of these have! — but I take maybe two baths a year anyway. I can do that while I’m at home. 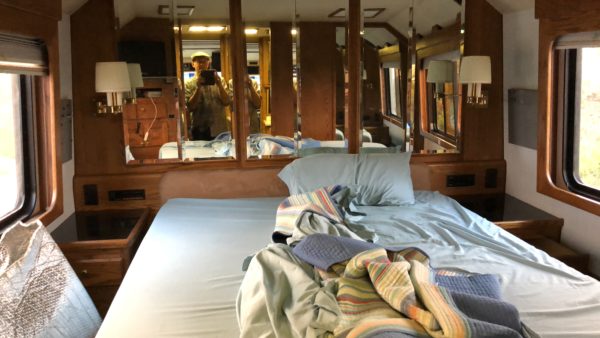 My messy bed. In the background, mirrors, with me in them. And behind the mirrors, more storage space. There’s also a five-foot-long hanging closet, oodles of drawers and cabinets, three giant storage bays under the bus (plus one partial one), and one safe. A secret safe. So secret that its location is a secret FROM ME.

Not that it matters: I doubt I’d be able to open it, since I didn’t get the combination. But one step at a time.

Everything is carefully-made, the cabinets are tongue-in-groove (as I discovered because the glue cracked on one in the Los Angeles heat and it has fallen apart and I need to glue it back together). This is just an amazingly-designed and engineered machine. All she needs is about a ton of armor plate and a pair of turrets and she’d be the ultimate urban assault vehicle. (And extra points if you know what movie that’s a reference to without google.)

This gal went for $400,000 new. I can see why. It’s almost a crime what I got her for, and I intend to make sure that she’s treated less shabbily in the future. 😀

This entry was posted in Sunday Switchup and tagged Central Valley, Lummox. Bookmark the permalink.