I had a bunch of doctors’ appointments last week, and I had five hours in between two of them, but had to get between them by public transit. I thought about working from a coffee shop, but was pretty fried. And Kaiser South San Francisco just happened to be right out in front of a gorgeous park, San Bruno Mountain State Park. And the other appointment was on the other side of San Bruno Mountain. So I thought, hey… I could go around. But why? (And maybe a little exhaustion would help me sleep, right?)

So I just walked out of Kaiser and started heading for the mountain. Which was quite visible, let me assure you. Stopped for a quick lunch, and then just walked in near the southeast corner, up the mountain, along the ridge, and then back down in the northwest corner. Vertical climb of over 1500 feet according to my fitbit, which I suspect to be understating things… there were a lot of saddles and one full-fledged miniature valley I had to navigate, and the highest point on the mountain is over 1300 feet all by itself.

At the end of the day, I had walked 18 miles, and climbed a total of over 2000 feet. I had poison oak, though only under my hiking boots — how does that happen? And in the end… I slept like crap. But I wouldn’t take it back, because it was gorgeous.

PS: Ugh. I have just made the huge mistake of ‘upgrading’ to Apple Photo. If you have Aperture, do not under any circumstances do this. You lose the ability to use Aperture, plus you lose the ability to do more or less anything without crashing. I thought I could continue to use Photo the way I did iPhoto: for automatic imports, and nothing else. Nope. It has intentionally disabled Aperture, it’s missing half the functionality of iPhoto and 95% of that of Aperture, and it crashes constantly. Whee, progress! 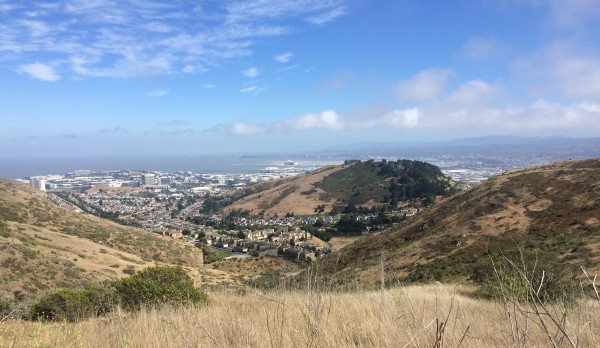 That’s Sign Hill, plus a good-sized chunk of South San Francisco. The weather was gorgeous on the southeastern side of San Bruno Mountain, but as you’ll see in the little video clip below, it was cloudy (and ALSO GORGEOUS) on the more northeasterly areas.