Autumn and my brother and I went out to eat at a place recommended by a friend for Thanksgiving dinner, ‘Hs. Lordships‘. It’s in the middle of the Berkeley marina, stuck way out in the bay. Gorgeous view. Humongous buffet. The food was… fine. Some of it was quite good, some of it was okay, some of it was… not. And it was insanely busy. Meh. For $25 each it would have been a great deal. For $50 each, there are literally a hundred restaurants within walking distance of my apartment that would have done a better job, though admittedly not with a buffet.

Ah well. The view was pretty spectacular (even if we weren’t anywhere near the windows).

In other news, here we have some very relieved fowl. Autumn and I ran into them while doing a tour of Vasco Caves, which is a kind of neat wildlife reserve (it has kit foxes!) with some Native American cave paintings that aren’t actually in caves. (Actually, they barely have one cave and it only goes in ten feet and is like fifty feet wider than it is deep. The name is suspect.) It’s really hard to get on the tour list, they only do a couple a month, but a last-minute spot opened up. And we saw a bunch of wildlife, including these turkeys, a bunch of other birds, a couple of coyotes, etc, but alas did not see any kit foxes.

Happy Turkey Day, to you and to these fowl, and to everyone else who lived to peck and squawk at least a little longer. 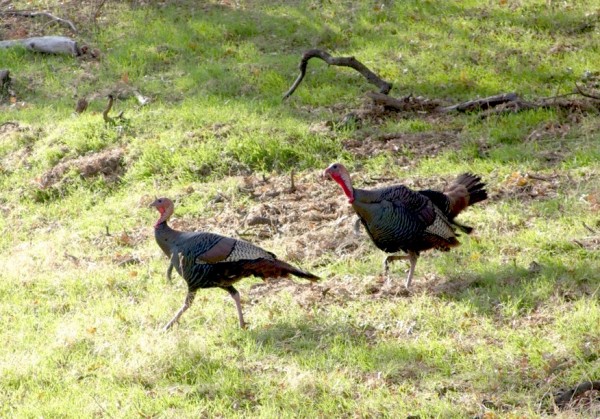 Turkey photos by Autumn, who was the one with the camera that day. 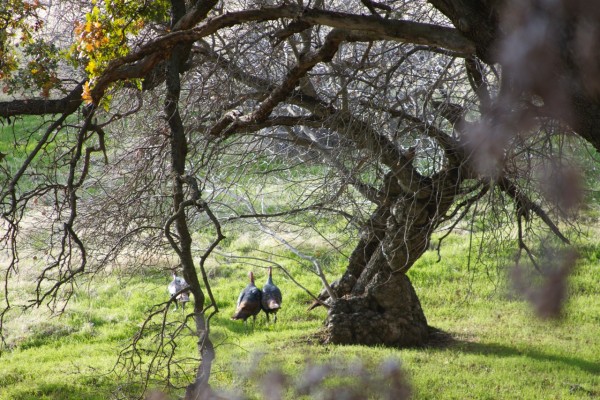 Apparently they can fly well enough to perch in the tops of trees. After I heard that, I kept my eyes upward whenever we were near trees. Being pooped on by a songbird is one thing…

This entry was posted in Dog of the Day and tagged East Bay, Turkey, Vasco Caves, Wildlife. Bookmark the permalink.