So, yesterday I said I’d have a story for you, and here it is. On January 7th, someone contacted me on a web site I discovered recently called ‘TimeRepublik‘. It’s a way of basically trading your hours for other people’s: you can advertise your skills on there, say you’re an expert tomato wrangler, and someone says ‘hey, I need a tomato wrangler for an hour tomorrow’, and they trade you one ‘hour’ for an hour of your tomato wrangling. And next week you need a computer programmer, or an apartment cleaner, or whatever, so you trade that hour in for one. Everyone’s time is worth the same, which I really like, and…

I seem to have gotten a bit sidetracked. So! Leonardo, a stranger to me from Brazil, contacts me through the site and says, “Hey, I see that you are a photographer. I need one in San Francisco, because I’ll be visiting and want to propose to my girlfriend there, and I’d like someone to take pictures’. Well, that turned out to be a bit of an oversimplification: what he actually wanted was to surprise her with the following: 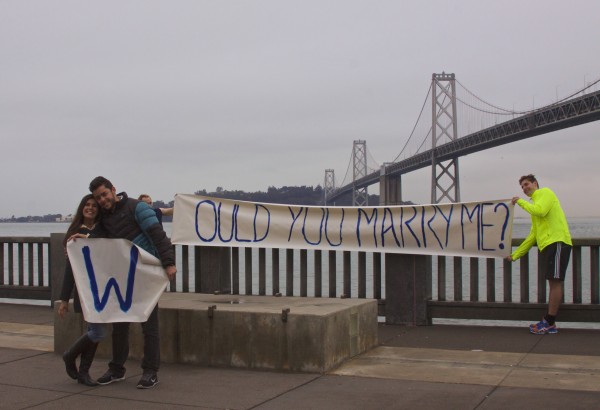 Note that in this picture she has absolutely no idea that anything’s going on, including the big banner behind her.

This involved recruiting a couple of volunteers for the banner, and another (Autumn) to hold a second camera, and then the time changed and we lost our volunteers and ended up having to recruit two random joggers to hold the banner. I wish I’d gotten their names so I could thank them properly on here.

In the end, everything went well: she was completely surprised, and very, very happy, and I got a few nice pictures which he then proceeded to do a great job editing and setting up. I’ll share a link to them when I figure out exactly where he put them. In the mean time, the above was one that I got on my camera.

The day was pretty grey, but the mood was anything but. And what a nice thing to get to be a part of.

This entry was posted in Sunday Switchup and tagged Bay Bridge, Embarcadero. Bookmark the permalink.