I’ve been meaning to do some reviews of San Francisco dessert places for quite a while. I think I might do them on Sundays for a while. It gives me a great excuse to order something decadent once a week. Not that I need an excuse.

This weekend was the first time I tried food from ONE65 Patisserie, a place down near Union Square. I tried two of their desserts: one, I think, was an Easter-themed version of one of their regular desserts, a ‘chocolate bunny’ with the same fillings as their chocolate imperial. The other was a lemon tart.

I’m sorry for photo quality. I’ll set up something somewhere that has a better  background and more light next time. But for now, without further ado: 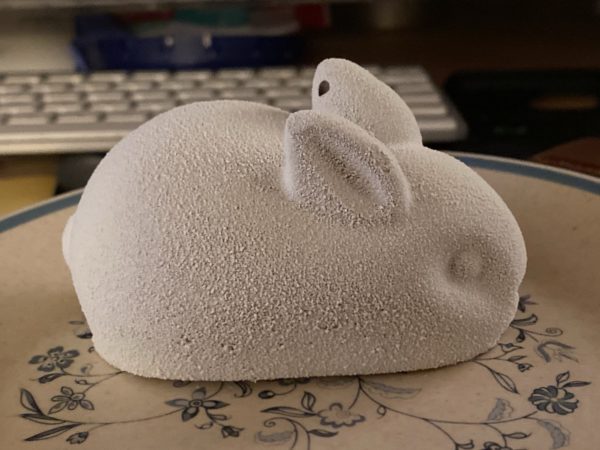 Obviously, this one was the chocolate bunny. It is amazing: a mix of fluffy chocolate and (I think) crème brûlée mousse, crunchy crushed wafers (feuillantine), and praline. The pâtissier at ONE65 clearly is one of the few who understands that a distinctive texture can be every bit as important as a distinctive flavor. Or perhaps I’m just a wee bit biased in that direction. Anyway, this is certainly among the best chocolate desserts I’ve run across in this city, and gets the coveted eleven out of ten cacao beans award for a chocolate dessert above and beyond the call of duty. 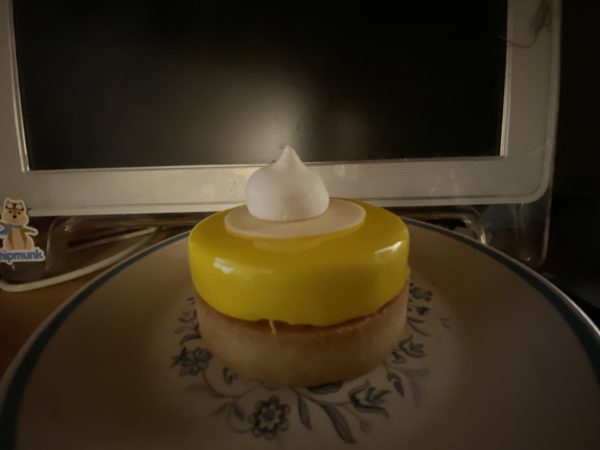 This, of course, is the lemon tart. The poof on top is meringue, which I’ve never liked. Fortunately, it’s little enough to be inoffensive, and in any case easily removed. And that’s clearly a personal preference; I know plenty of people who adore meringue. The little sliver beneath it is white chocolate, quite possibly simply there to keep the meringue from sinking.

The yellow part is where the fun begins. The yellow itself is a kind of sticky glaze, with very little flavor. Not my favorite part of the dessert, but it’s a very thin covering over an incredibly light and fluffy mousse, filling the upper half of the dessert. I could easily see the meringue sinking into this stuff. I could see a feather sinking into this stuff. Perfectly balanced between tart and sweet. Absolutely lovely.

The lower half is a thicker, creamier, more traditional lemon pie texture, with a little more tartness. More like a ganache than a mousse, a perfect contrast to the upper half. The crust is excellent, but nothing out of the ordinary. But then, it doesn’t have to be, because the magic of this one is all on the inside.  This may be the best non-chocolate dessert I have had so far in the city of San Francisco. Bravo!

Incidentally, one of the two fillings is lemon, while the other is yuzu, but since the description on their order page calls them both ‘ganache’ (lies! damned lies!) I honestly don’t know which is which.

Anyway, we’re going to give both of these eleven out of ten. Next week, I’ll be reviewing one of my old favorites, and I promise that I won’t be awarding TWO elevens. You’ll have to settle for one.

This entry was posted in Sunday Switchup and tagged Dessert, Review, Union Square. Bookmark the permalink.