It’s probably about time I confessed something to all of you out there. I keep saying that Autumn and I don’t have a dog, but that’s not quite true. We actually have a whole bunch of dogs. It’s just that they’re all stuffed animals. (Ssh, don’t tell our landlord: he’s against us even having fish, so we’re honestly not sure how he’d react to stuffed animals.)

I’d like to introduce the two primary dogs in our lives: Weginald Waddley the Pembroke Welsh Corgi (originally named for an English MP, although his name has been mangled into near unrecognizability here) and Dame Weetabix (“Bixie”) of Snorgling-on-Axis.

Where did they come from? Well, several years ago, Autumn and I had been discussing what kinds of dogs we liked, and we both had agreed that corgis were awesome (and that we also loved Bernese mountain dogs, but that their lifespans were just too damn short.) And so when Autumn ran into Weginald at a thrift store, for $1, it was love at first sight.

Fast forward to this Christmas: Autumn had me make a Christmas list, and, as a joke, I listed ‘a Bernese mountain dog/corgi mix.’ Autumn’s mom went out and found a Bernese mountain dog stuffed animal and performed some ‘cosmetic surgery’, and voila… Bixie! (Go ahead. Tell me I’m pathetic. I dare you!) 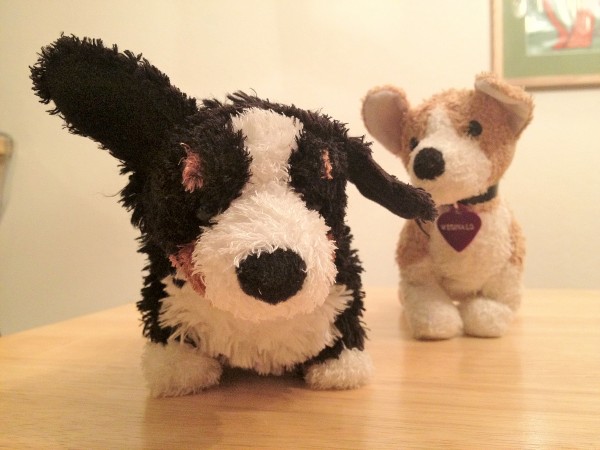 Yes, Weginald is wearing a collar. With a purple tag. That says 'Weginald' on it.

This entry was posted in Roll of 28 and tagged Personal. Bookmark the permalink.