Dog of the Day: Rollz the Miniature Shar Pei Puppy

Whoo. I’ve been doing this blog for two and a half years now, daily, with very few breaks (and only one that I recall longer than one day). What with one thing and another, I’m getting a little burnt out on it right now. I had sort of been hoping to get Autumn to do some contributing, so that I could take time off now and again, but she’s made it pretty clear she isn’t interested in the writing it would entail. Maybe I can find someone else to spell me for a while, when things get especially hairy, as they did in the last two weeks.

They’re a little saner now, thank goodness. And I’ve heard tell that once you take a week off blogging, you might as well give up, since you lose half your audience every two days, so I’m going to persevere, at least for now. I can’t afford to lose any of you people! (Well, anyway, I don’t want to.)

So I’d like to introduce Rollz, the six-month-old miniature shar pei puppy. I didn’t even know there was such a thing as a miniature shar pei, but from available evidence I’d say that there probably is, and she’s it!

Pretty cute, and not (yet) as 'Rollz-y' as most shar peis I've met. 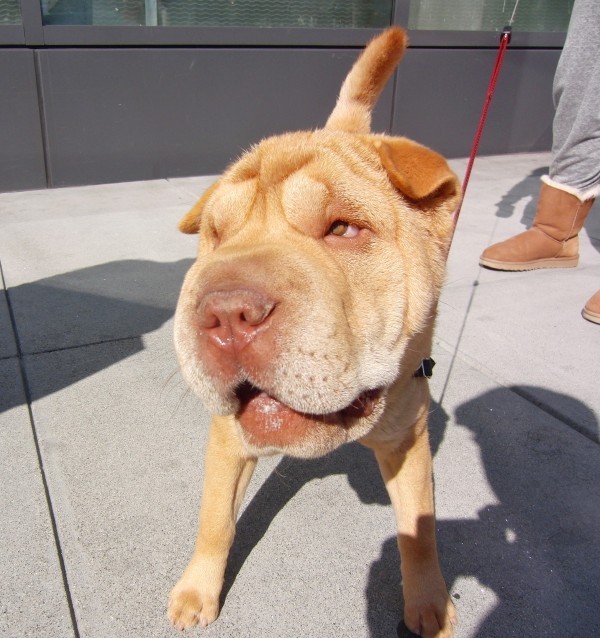 I like her. She has a very expressive face.

This entry was posted in Dog of the Day and tagged Miniature Shar Pei, Mission Bay, SOMA, South Beach. Bookmark the permalink.

4 Responses to Dog of the Day: Rollz the Miniature Shar Pei Puppy