First off: sorry about the lack of a post yesterday. Autumn and I are stressing out really badly right now: we’re trying to move into a new place, and it’s a really bumpy ride. I’ve been suffering from insomnia because of it, and so when I was starting to nod off last night at 11 PM, I hopped right into bed in the hopes of a good night’s sleep. Result: woke up at 3 AM, lay awake in bed until 7. Bah.

Second off: the dog. Autumn and I aren’t sure about this guy, so we made our best guess. He’s either a Spanish water dog or a puli, we think. And since we’ve already posted a puli, we’re calling this guy a Spanish water dog. That’s our story, and we’re sticking to it, at least until someone tells us different.

Anyway, I ran into this guy a few weeks ago, on the way to work. He was very interested in everyone who walked by. Most of the other people gave him a really wide berth, but I said hi, and as my reward, collected a few licks. (One more slightly blurry picture after the break.) 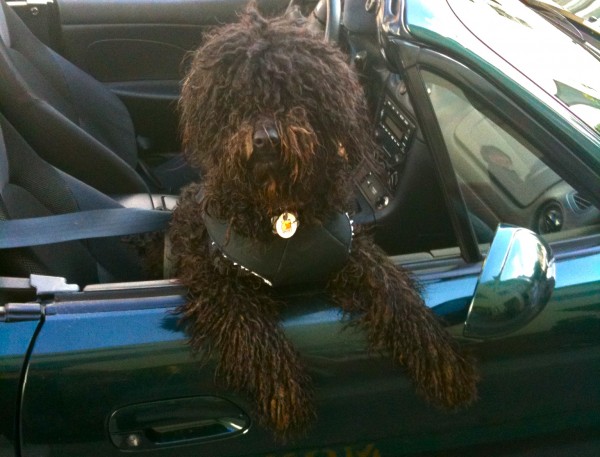 Whatever that is he has attached to him, it was perfect: he could stick his head out the window, but he couldn't climb out, and it was just short enough that he couldn't hit his head on the windshield. 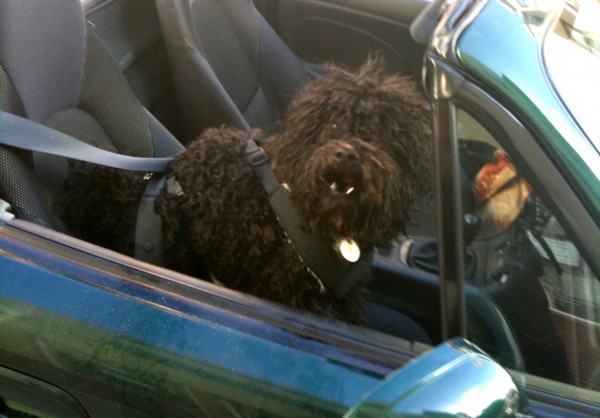 A little blurry, but this shows the size of the dog a little better. And a goofier expression, too.

This entry was posted in Dog of the Day and tagged Spanish Water Dog. Bookmark the permalink.

1 Response to Dog of the Day: Spanish Water Dog