I heard these birds squawking long before I managed to see where they were perched. There were LOTS of them, and man, were they loud.

(I just realized that the title could be mistaken for some kind of political statement about Trayvon Martin, or about the new movie about the Oakland shooting, Fruitvale Station. Black birds, black people, something like that. Just to make it absolutely clear: the collective noun for a group of crows is a ‘murder of crows.’ I try to maintain the blog as a politics-free zone, both because I think everyone, no matter their politics, should be free to admire cute pictures of dogs and because it’s a real relief to have somewhere in my life where I don’t ever have to think about politics.) 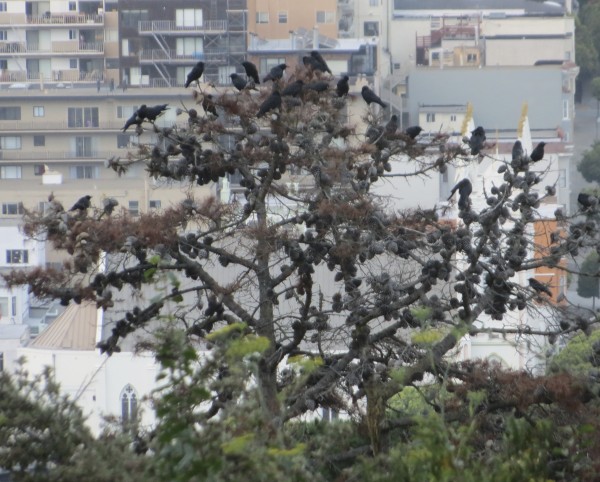 This would’ve been a lot nicer if I’d had my big schmancy SLR and been able to open up the aperture wide enough to blur out the background.

This entry was posted in Caturday Supplement and tagged Crow, Russian Hill. Bookmark the permalink.