Well, I was going to post another corgi today, but … well, not that any of you want to know this, but what the heck, I’ll explain anyway. See, because of my, er, confused moving situation (a very gentle term for it) my phone service has moved somewhere that, as things now stand, I am pretty unlikely to end up able to move myself. Sadly, at the moment it’s pretty tough for me to move it back. This also means that my internet service has moved there as well, which leaves me without any here. (That’s the reason for the extended lack of DoSF last weekend.) So I’m, ah, being a right bastard and stealing a bit of bandwidth from a neighbor. But the signal is really flaky, which means uploading one picture took me roughly twenty minutes of retrying, re-retrying, and holding my laptop over my head. Posting six pictures, even six pictures of a cute fluffy corgi, isn’t in the cards tonight.

So instead, I give you an American Eskimo Dog. I don’t think this is the same one I posted a couple months ago, but I confess to an inability to tell them apart. 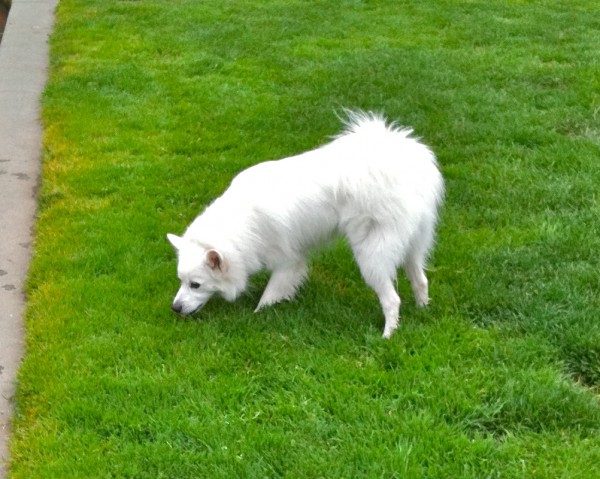 Eskies are such gorgeous dogs. And so soft. If I had one, I would seriously be tempted to try out one of those places that cleans dog fur and turns it into yarn for knitting.

This entry was posted in Dog of the Day and tagged American Eskimo Dog. Bookmark the permalink.