A few weekends ago, I had the pleasure of dogsitting a gorgeous white shepherd (more or less a white German shepherd, but apparently they’re their own breed now). She’s an older dog, and her kidneys, though still working fine, aren’t what they once were. So I ended up having to stay with her until 10 PM, and then get up and get back to her by 6 AM. Which wouldn’t be so bad, except the busses between where she lives and where I live don’t start up until well after 6.

Actually, I lie, because it wasn’t ‘so bad’ anyway. It’s gorgeous getting up at 5 once in a while, especially on a weekend when nobody else is about. It was a lovely 40-minute walk to her house through the deserted streets, and I was treated to a dozen gorgeous views, only one of which I thought to take a picture of. This is one of San Francisco’s famous stairways: looking south on Lyon Street from Broadway. There would be a nice view of the bay and probably the Golden Gate as well, if it weren’t for the fog. 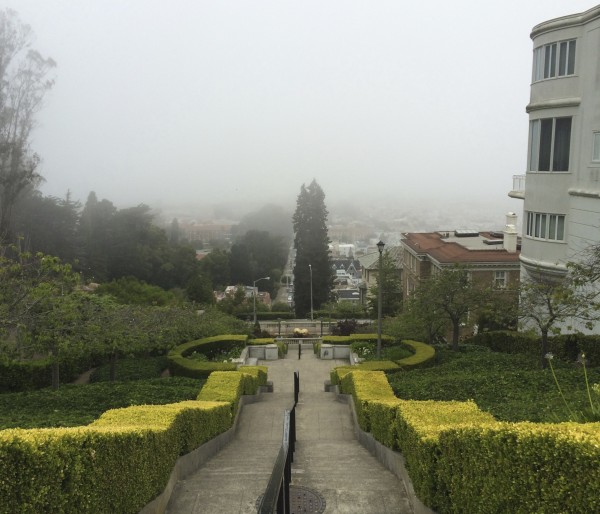 Yes, I was going down them… but I had to get up the other side of the hill first.

This entry was posted in Sunday Switchup and tagged Cityscape, Pacific Heights, Presidio. Bookmark the permalink.