I ran into two other dogs on my trip back from Indiana to San Francisco. This one, a very happy and friendly Cavalier King Charles spaniel, I ran into at the San Francisco airport. Her mom was busy at a food counter, but several people snuck in brief greetings on the way by.

The other dog was a ridiculously adorable 7-month-old puppy named Ava Grace that I ran into in the airport in Chicago. I was walking down one of the terminal corridors, and I was about 2 hours early for my flight so I was dawdling. I saw a couple carrying around this adorable happy puppy and I said, “Excuse me, hello, I’m a licensed dog blogger, and I’m afraid I’m going to have to take some pictures of your dog.” I got a couple weird looks, but I’m used to that. But when I gave them my card, they said, “Oh, wow, she’s from San Francisco! We’re headed back there right now!” And yes, this dog was on my flight.

And I took over 50 pictures and not a single one of them came out, because the dog was wiggly and the light was dim. DAMMIT! 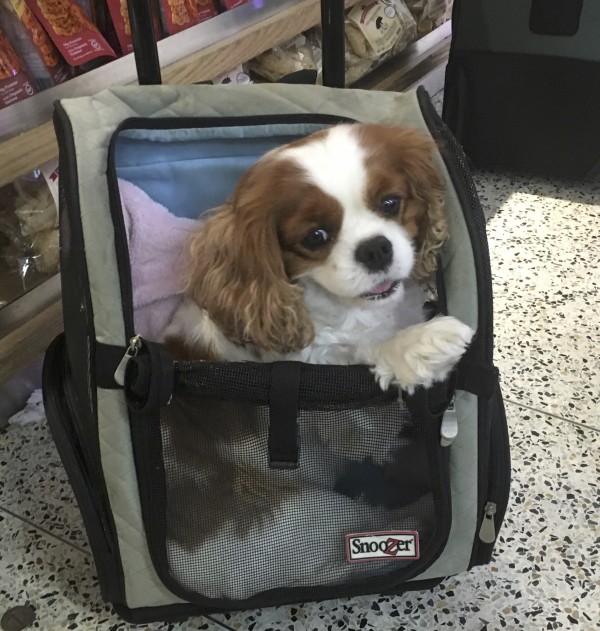 If that isn’t a doggie smile then you can take away my dog blogger license.

This entry was posted in Dog of the Day and tagged Cavalier King Charles Spaniel, Daly City, San Francisco Airport. Bookmark the permalink.

1 Response to Dog of the Day: Cavalier King Charles Spaniel