Someone nice (thanks, M.C. of The House of Two Bows!) nominated me for a ‘Versatile Blogger’ award. 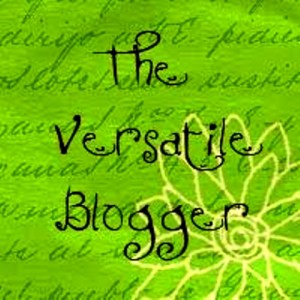 I’m not sure a blog that consists entirely of pictures of dogs and goofy commentary (in case anyone out there hasn’t noticed, hover your cursor over the dog photos for a separate set of captions, these from the dog’s point of view) can really be considered versatile, but I learned a long time ago that second-guessing people who are paying you compliments is one of the worst forms of ingratitude, so I’ll just accept it and say thank you!

But wait: this award involves work. And a non-dog-related post at that. I have to write seven things about myself. And then I’m supposed to pass this award on to a bunch of other bloggers. Hmm. That might be a problem. So let’s start with that, as number 1:

I used to. I had a list of eight or so blogs that I read every day, and more that I read occasionally. Most of them were political blogs (though a couple weren’t) because I was an avid political junkie and a very active volunteer and activist. But almost a year ago, I realized something: if I was going to stay sane, I had to give that up. I was starting to get so depressed at the state of the country, and at the direction things were going in, that I was literally unable to stay caught up on sleep, was unable to concentrate on work, was in short unable to actually live my life.

I gave up my political blogs, I gave up my politics-watching. And then the two blogs that I read daily both started becoming more political themselves, and in a direction that I could not stomach. (I will let you guess what that would be, but the fact that I live in San Francisco is probably a pretty good indicator.) And thus I gave those up too.

These days, I read a blog every once in a while. Every time M.C. drops a comment on my blog, I go poke around on House of Two Bows. There are a couple of programming blogs that I poke my head into every once in a while (and no, I’m not going to link my dog blog to a ‘how to survive perl programming’ blog). And of course I love poking around photoblogs, especially of the cute baby animals variety. But mostly, I dink around a bit on reddit and practice my other hobbies.

I touch on this in my ‘about the authors’ page, but let’s face it, nobody really reads those, so I think I’m probably safe in putting it in here too.

I currently work as an Engineer-in-Test in the QA group for Cloudmark, Inc. If you have Comcast Internet, or Cox Cablevision, or Verizon Internet, or, well, really a whole lot of different ISPs (but not AT&T), you use our anti-spam software. If it doesn’t work well, then I am partly to blame.

What is a Software Engineer-in-Test? (Also known as an SDET: Software Development Engineer in Test). Well, normally it’s a software engineer that spends most of his time writing test tools, automated test cases, or other software that is used to test other software. In my case, though, it’s a little less straightforward than that. I spend most of my time testing software, but the software I’m testing really requires me to be intimately familiar with its internals, and able to understand exactly what it does and how the code actually works before I can really test it. Hell, on a first test of a new daemon, I probably spend more time reading the code and playing with it than I do actually testing it. In that respect, what I’m doing is probably closer to some aspects of paired programming (although without the realtime element) than it is traditional software testing.

Oh, and on that note: if anyone needs any IT work done, I still do it in my spare time. There isn’t a lot that I haven’t tackled at one time or another.

What else do I do? Eh, lots of stuff, at various times. Aside from this blog and various other dog-related things, my current and past hobbies include:

Huh. That’s only three things, and I’m already exhausted from all this writing. I’ll post some more things tomorrow. If anyone has anything they’d like to ask me, feel free to drop a comment below. No promises, though, depending on what you ask.

This entry was posted in Site News and tagged Random Stuff. Bookmark the permalink.