I’ve noticed that a log of blogs seem to be doing wrap-ups for the year, complete with all sorts of pretty graphs and arrows and pictures and comparisons. (“My blog got more than 223 San Francisco cable cars’ worth of visitors!” “Oh yeah? Well, my blog served up more documents than a standard-sized US mail van can hold!”)

I don’t have any of that, because I don’t use one of the blogging services, and neither Google Analytics (which I do use) nor the stat software I run on the server provides pretty pictures meant for human consumption. However, it does seem like a reasonable time to do one, not just because it’s a new year but because it was two years ago this month that I really started posting on this blog in earnest. (In November 2009, I posted once. In December, about 18 posts, with large gaps. In January, 30 posts on 29 days, and since then it’s been pretty much daily.)

So, one thing I’ve learned about my readership from these site statistics is that I have quite a lot of sophisticated readers who don’t like to be tracked by Google Analytics. Even discounting all of the traffic I get from automated web crawlers of one kind or another (such as the Google search indexer and the Google image crawler), and the traffic from blog spammers, there is still a significant difference between what my native site counter says and what Google’s tools say. There’s also another problem: I didn’t move the site to its current location until March of last year, and I didn’t start using Google Analytics until May. So both of these sets of numbers are incomplete. Which is why I’ll be using average monthly numbers instead of whole-year numbers.

Although there is this disparity, I’m still going to use the google numbers for everything except the total data figures. Why? Because it’s really hard to filter out all the web crawlers and robots and such. Man, this web stuff is complimicated.

So it looks like my little community is growing. Hooray! (There were a couple of large spikes in December, including one day where I had well over a thousand unique visitors, when I posted links to a couple of dogs to a discussion on Reddit, so I don’t expect January to be quite as good as December… but who knows?)

What’s next for DoSF? Well, I’m working on a DoSF store, possibly including the option for people to purchase pictures of their dogs (or someone else’s dog!) printed to canvas. There’s a local company in San Francisco that does an incredible job of this, if you give them good artwork. And I may also be getting an occasional guest blogger in. Stay tuned, dear readers!

And in the mean time, here’s a picture of one of the parks that I visit to find dogs to take pictures of. 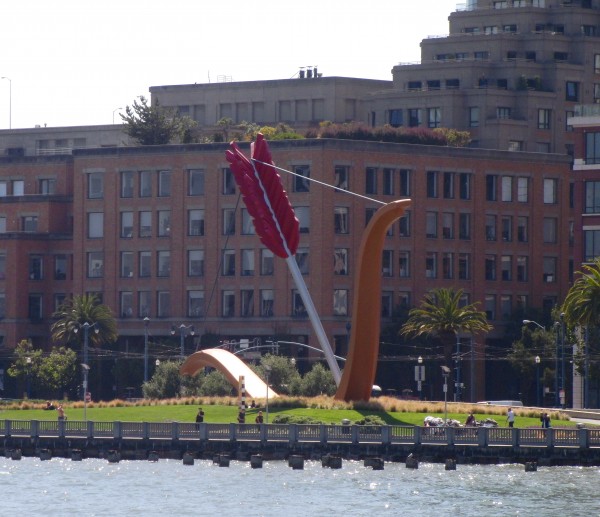 Rincon Park. Why a giant bow and arrow? I don't know. Why not? This is San Francisco.

This entry was posted in Site News. Bookmark the permalink.