Sorry for the lack of effort, yesterday and today. I’m feeling totally enervated (blame pain and codeine, and bad news.) So: have an Old English sheepdog, shaved short except for his Beatles haircut.

The bad news: Autumn’s family dog died last night, about a month after she was diagnosed with breast cancer, and about three weeks after what was thought to be a successful operation to remove it. Nobody’s quite sure why, but even while she wasn’t able to keep food down, she was still happy to play and solicit petting up to the last, so I guess at least that she didn’t suffer too badly. I’ll try to scrape together enough pictures for a memorial when Autumn gets back. 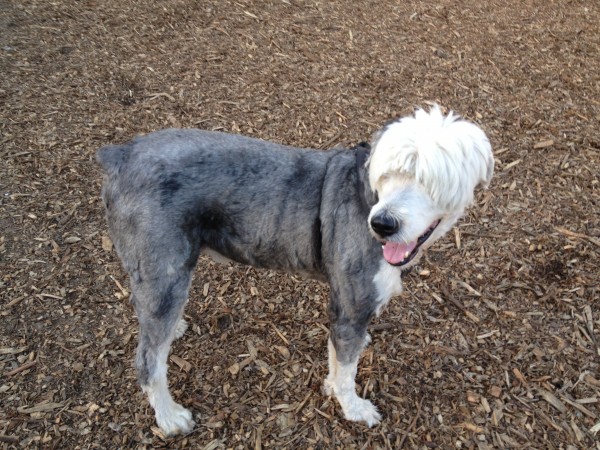 I don’t know what possessed mom or dad to give him this haircut, but I think it’s hilarious. I just hope he doesn’t get picked on by the other dogs.

This entry was posted in Dog of the Day and tagged Inner Richmond, Mountain Lake Park, Old English Sheep Dog. Bookmark the permalink.