I went to the doctor’s office on Wednesday morning for something which really, really I hope will turn out to have been nothing major (a drug sensitivity, perhaps), but which is kind of freaking me out a bit right now. I intentionally left home early so I could walk to the doctor’s office, about two and a half miles, and stop for some canine therapy. But I wasn’t expecting to run into three gorgeous puppies. I’ll tell you what, it did wonders for my state of mind.

And in at least one case, maybe I can return the favor. Met Lily, officially ‘White Lily‘, available for adoption from Family Dog Rescue in San Francisco. She’s still a puppy, ten to eleven months old. She’s blind, but doesn’t let that bother her one bit. She’s great with people, with kids, with other dogs, with cats, and most likely with pretty much anything you throw her way. Sounds like a heck of an opportunity for someone. 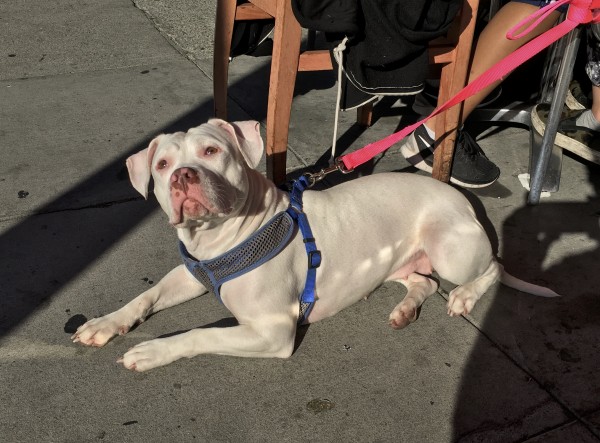 Lily has a deceptively lost and forlorn look. Be warned: she will lick you and beat you with her tail and just generally happy all over you if you get near her. And you will LIKE IT. 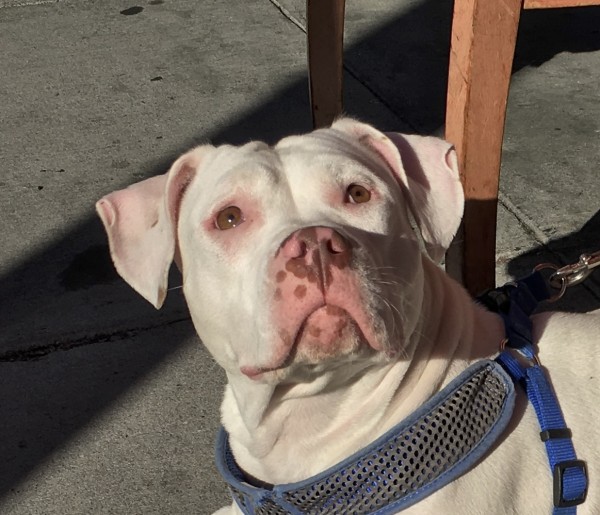 Look at that face. Who could say no to that face?

2 Responses to Adoptable Dog of the Day: Lily the Blind Pit Bull Mix