Happy St. Paddy’s Day! (And if you spell it St. Patty’s Day, shame on you, you’re buying!) I’m posting these two distinguished Irish-folk the day before, but since I typically only manage to post about half an hour before the date turns, I figured I’d give you the chance to enjoy them on St. Patrick’s itself.

Chelsea and Marleybone are not the first Kerry blue terriers that we’ve seen (that honor belongs to Argos) but I haven’t seen one since 2011, so I think it’s about time. They were a bit rowdy, perhaps wanting to take on the king of the terriers for his title, and I think these two could just about do it, too… they were quite large!  Eventually we got them faced in the same direction for long enough to take a picture, and while we were trying, I hit their folks up for some Kerry blue facts. Apparently Kerry blues have blue skin, and their coats start out black and lighten to grey as they become adults. They were originally bred by farmers to control animals that ate their crops, like rats, rabbits, and tennis balls, which explains their visceral reaction to all three. 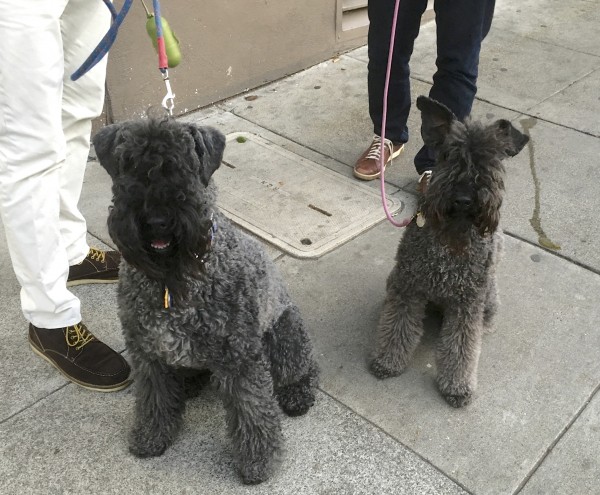 The one on the left has classic Kerry blue ears. The one on the right has the ‘what me worry?’ variant. Also, they both have wookie legs.

This entry was posted in Dog of the Day and tagged Kerry Blue Terrier, Nob Hill, Polk Street. Bookmark the permalink.