Dog of the Day: Sally The Pit Bull

Through a series of funny coincidences, I found out a while back that Sully is now named Sally, and was adopted and is leading a happy life down in Glen Park, a neighborhood of San Francisco. A couple of weeks ago I was invited to come down and see her and another dog (a gorgeous standard schnauzer named Jailbreak), have a little wine, and take a bunch of pictures. How could I refuse?

A terrible problem occurred after that, though: I have 300 pictures of the two of them, and around 50 of them are adorable and not blurry. It is taking me forever to choose! So I’m going to post some pictures of Sally today, and some of Jailbreak tomorrow, and then some of both of them together on Wednesday. Assuming everything goes as planned, of course.

I’m also going to include a few pictures of Sally that her family sent me. You’ll be able to tell which ones they are, by the fact that they are incredibly perfectly adorable. 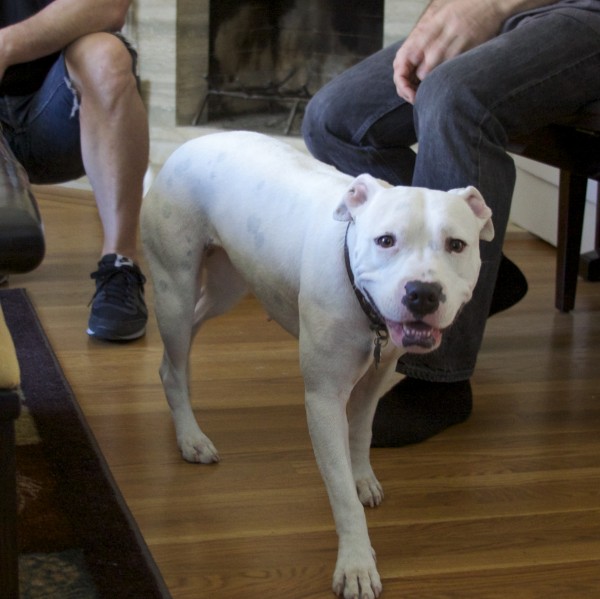 Sally was friendly but a little skittish the first time I saw her, but she has absolutely blossomed in her new home. 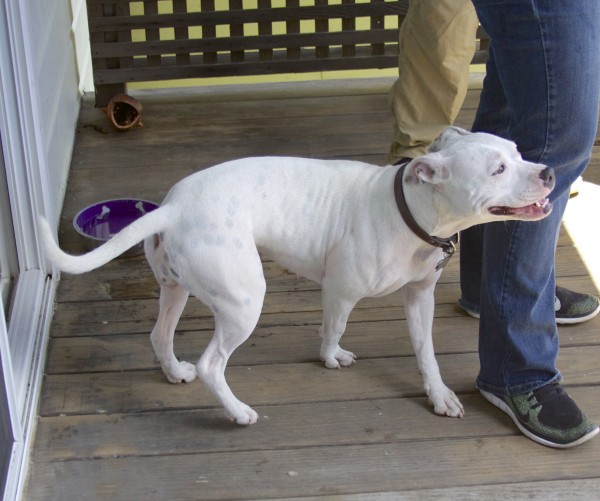 She had a huge grin on her face almost the entire time I was there. And the exceptions were mostly because when you’re wrestling with another dog it’s hard to grin and achieve a hold at the same time. Sometimes she chose one, sometimes she chose the other. Either way, she was happy. 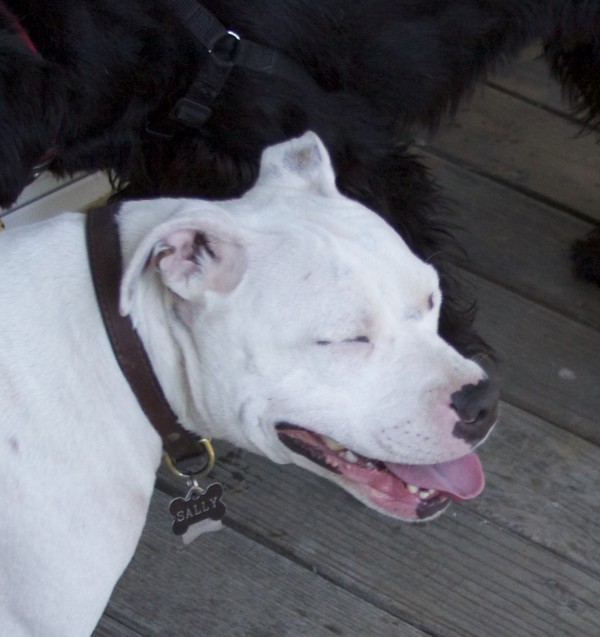 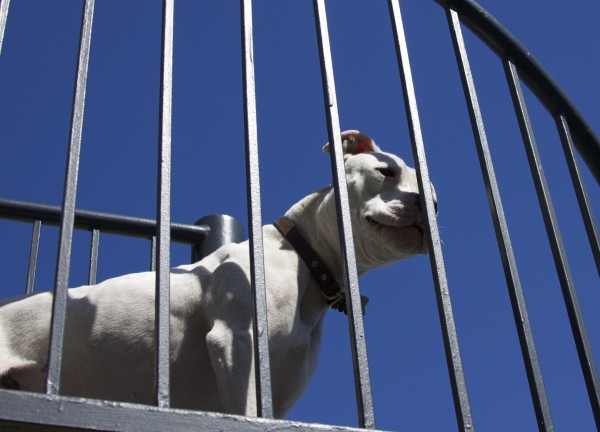 The house she lives in has a pair of gorgeous back porches connected by a spiral staircase. I’ll try not to exude any more envy than I have to. 🙂 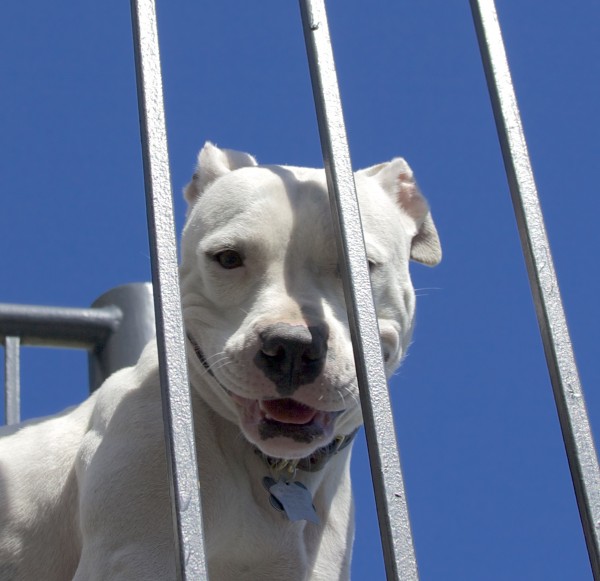 More smiles. So glad to see her so obviously happy. 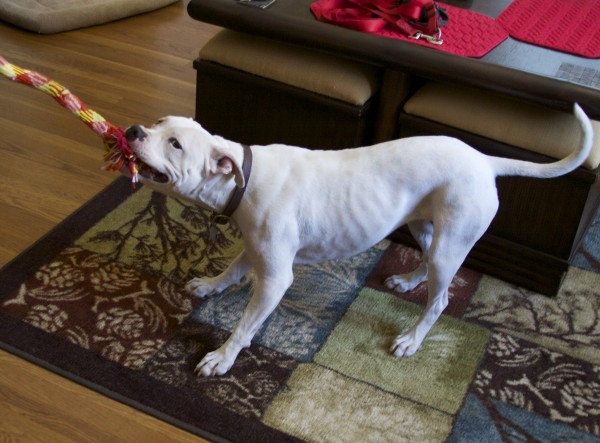 Look at that sidelong expression. So cute! 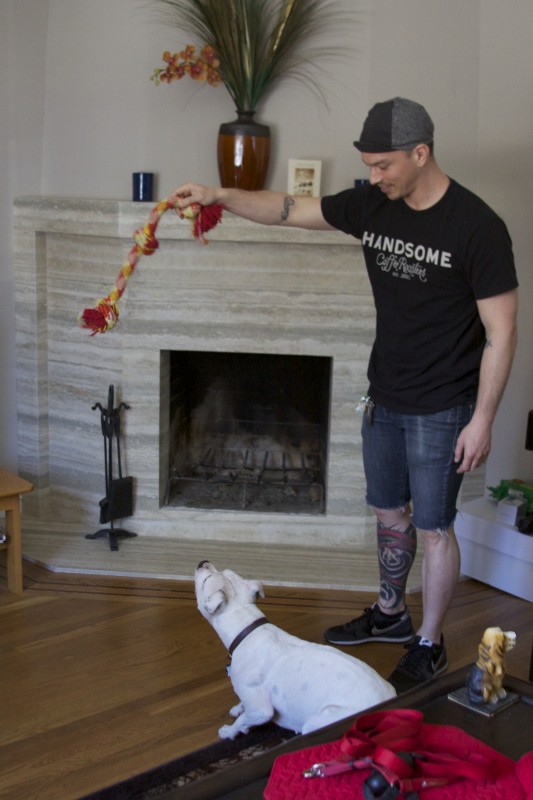 She’s a hell of an athlete, too. I’m used to small dogs jumping three times their height, but… 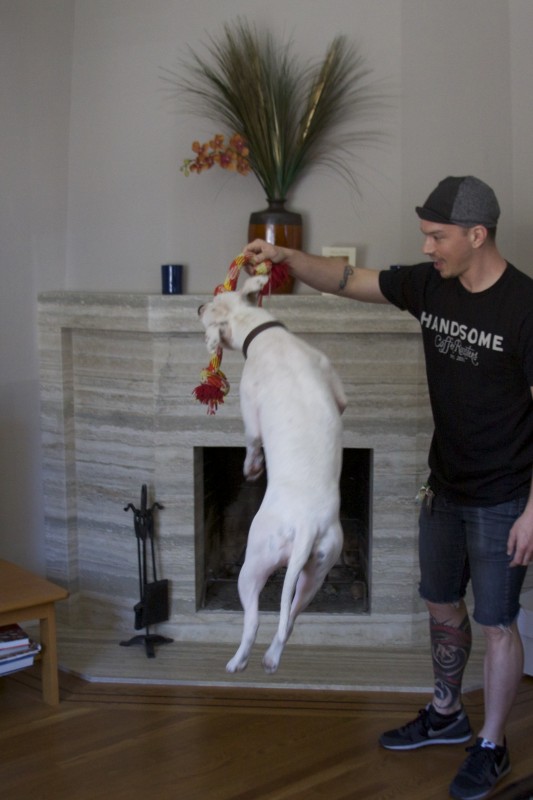 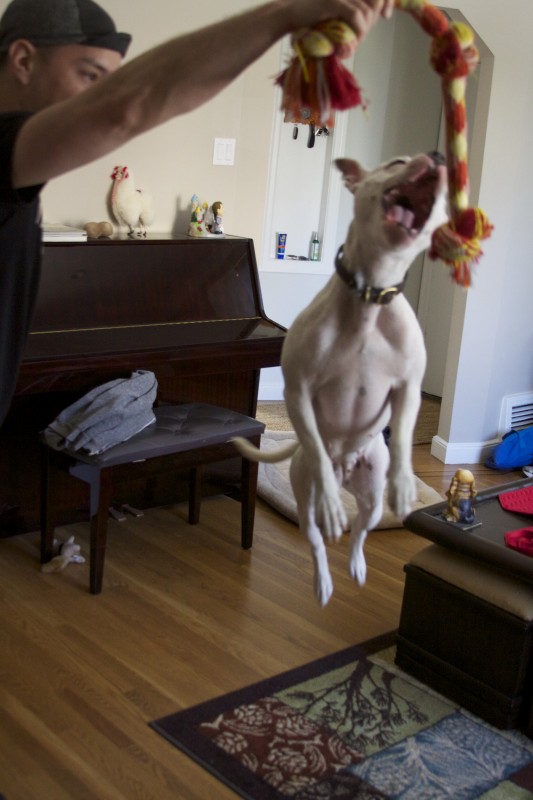 She looked like she could have kept on doing this for hours. 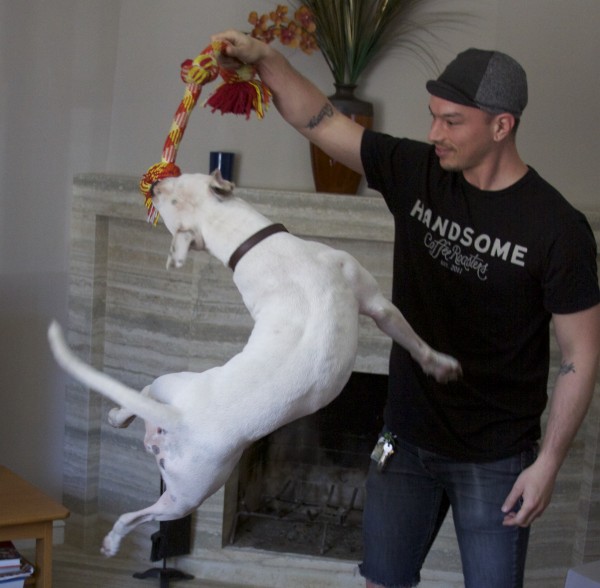 I could have watched her for hours, too. 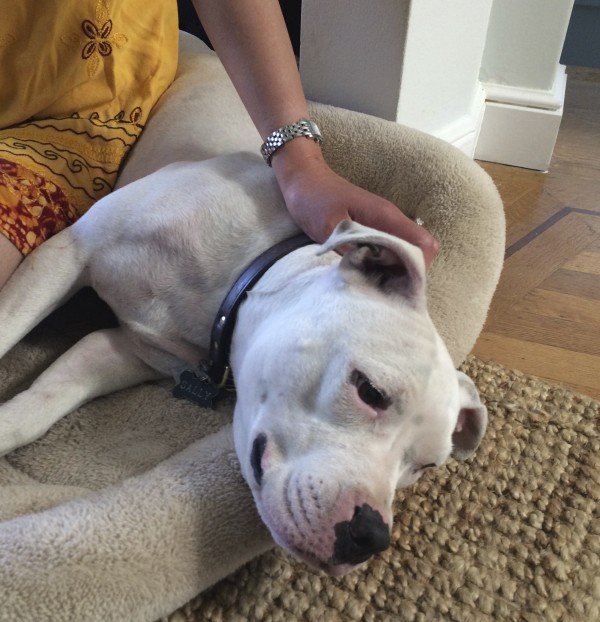 Her nose is amazing. It looks like she dunked it in a bowl of India ink. 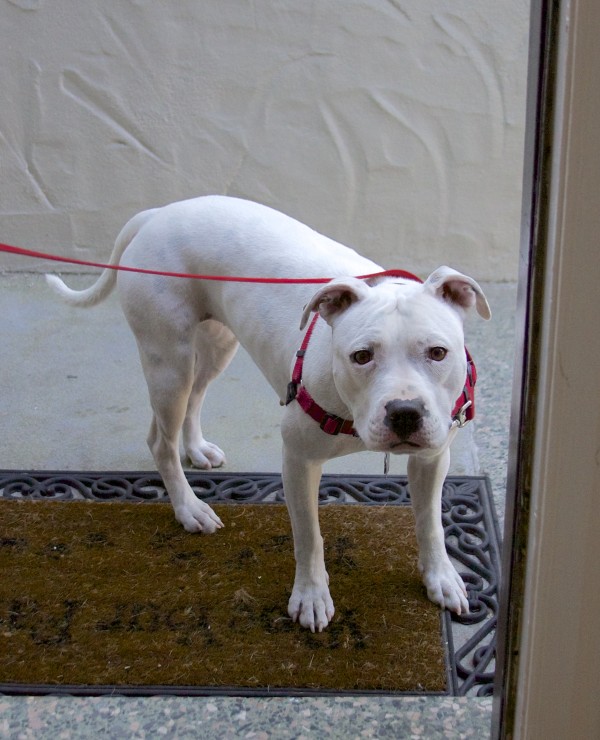 The only two times I saw her looking other than delighted was when her friend Jailbreak and his humans left, and when I and a couple of other people left. She just loves people instantly, and then never wants them to leave again. It’s so adorable. 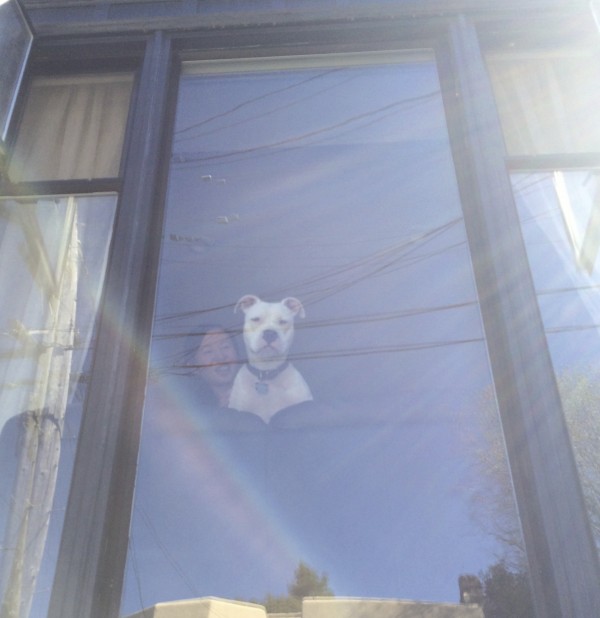 She even came to the window to say goodbye. 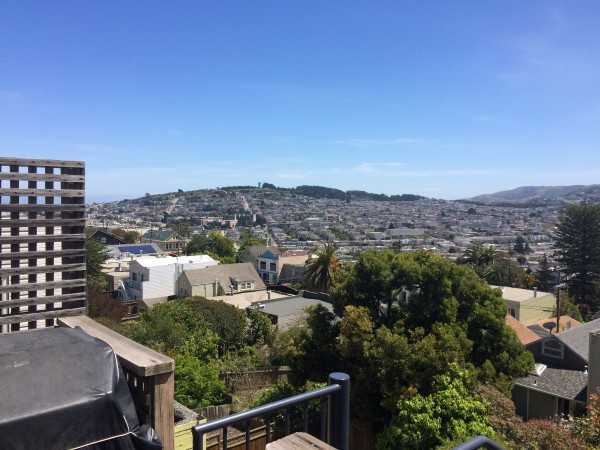 The view from Sally’s back porch. As I said… I’m kind of jealous.

A panorama, from the lower half of the deck. 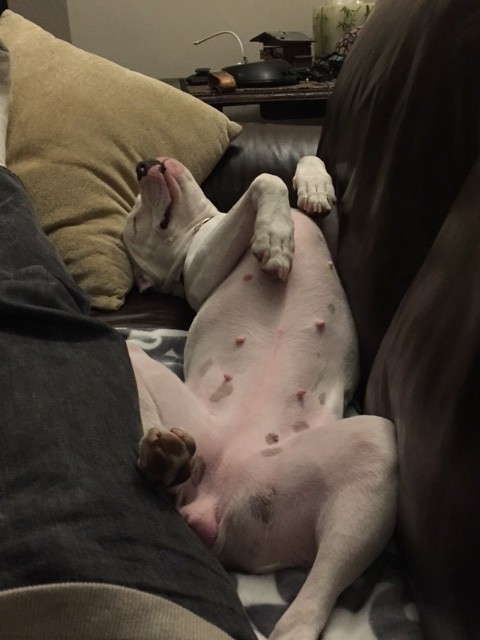 If that is not the most profoundly comfortable dog I have ever seen, I don’t know what is. (These last two are their pictures, not mine.) 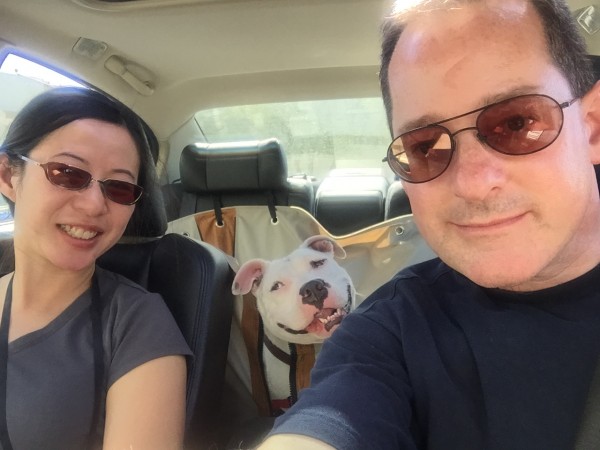 Look at that face. Just look at it.

This entry was posted in Dog of the Day and tagged American Pit Bull Terrier, Glen Park, Repeat Customer. Bookmark the permalink.

3 Responses to Dog of the Day: Sally The Pit Bull