Here’s Jinxster! I thought I was posting pictures of him once before, but that turns out to have been bad note-taking on my part. This is him, in all his six-month-old adorable cuddly glory.

I’m trying out something new: apparently my version of wordpress now supports ‘galleries’. I have no idea what they look like, so you get to find out at the same time as I do. Voila!

Edit: Well, I’m going to call that experiment a failure. Probably would be fine if I didn’t like long captions though. 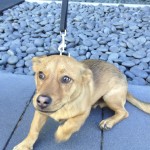 Despite the blurry nose, I like this one a lot. Look at those eyebrow-whiskers. 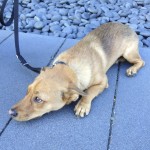 A very corgi position. I like to call it the ‘speed bump’. 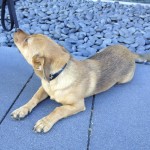 I think this was this guy’s first day, or at any rate first week, in the city. I hope I run into him again!

This entry was posted in Dog of the Day and tagged German Shepherd, Mixed Breed, Nob Hill, Pembroke Welsh Corgi. Bookmark the permalink.

3 Responses to Dog of the Day: Jinxster the Corgi/German Shepherd Puppy